The best homemade beef jerky recipe made with Habanero Peppers is the last and only recipe you will ever make from now on! Learn how to make great tasting beef jerky with this easy to make recipe.

The spicy kick of the peppers and the saltiness of the Sea Salt really makes this the top jerky recipe ever!

📋 Why this recipe works

This is a great tasting jerky because of the original flavor it has beneath the heat from the habaneros. The sugar and worcestershire help with that original flavor and also balance the heat of the peppers. I love spicy jerky, and I really love the flavor of habanero peppers, and this beef jerky recipe checks both of those boxes!

Start with a great cut of beef when making this jerky. Making sure to choose a lean cut of meat is important, the cuts below have little fat and are great for jerky.

Best meat to use

I used Beef Eye of Round, but you can find a complete list of the best cuts of meat to dry beef jerky here!

The first step of slicing meat for jerky is to trim the cut of meat of all visible fat. You can see the white fat in the picture below, just trim that off BEFORE you start slicing the meat.

Fat spoils faster than meat, so the more you get off now, the longer your jerky will be shelf stable.

Now it's time to decide whether you want a more chewy jerky or tender jerky, because the way we slice the meat will determine this.

Slice even strips so they will dry evenly and be finished at the same time.

For more in depth information and a video showing you how to slice the perfect jerky strips, visit my Slicing Meat for Jerky Page.

I didn't use it on this recipe, but a jerky slicer is a FANTASTIC piece of equipment to help get even strips when slicing jerky.

Still don't want to slice your own meat? No worries, ask your local butcher to use their meat slicer to slice your eye of round roast ⅛" thick. Most of the time they will be happy to help.

This beef jerky recipe has some great ingredients including: garlic powder, sugar, fresh cracked black pepper, Worcestershire sauce, and of course some fresh Habaneros! To make the marinade, just combine all the ingredients that are listed on the recipe card below in a blender and add the fresh Habaneros.

Readers Tip: Substitue ⅓ cup of the water for ⅓ cup of soy sauce for a more salty intense flavor.

Blend until the peppers are fully incorporated into the marinade. Smelling this marinade made me say "Oh Wow!" after blending these habanero peppers you see in the picture above. It was a STRONG smelling of fire, heat, and goodness! Ha.

Combine the jerky slices and marinade in a bowl or ziplock bag and marinate for 6-24 hours. I like using a ziplock bag as it seems to allow the marinade to fully coat the meat. Mix the bag up a couple times during the marinading process to also make sure each piece gets an even amount of these great tasting spices!

I marinated this beef jerky marinade for 18 hours, which was plenty of time to impart it's spicy rich flavor into the jerky.

After marinating, strain the jerky strips in a colander to remove any excess marinade. Place the strips on a paper towel and pat dry to remove even more of the excess marinade that is sitting on the surface. Doing this will help speed up the drying process.

Transfer the strips to your dehydrator trays, oven rack, or smoker racks to dry. I used a dehydrator, but you can also use an oven or smoker when making this jerky.

Dehydrators are an inexpensive and great way to make beef jerky. These machines can vary in price from $50 to $500. A great starting dehydrator is the Nesco Snackmaster which will run under $100.

I used my Excalibur Dehydrator for a total of 3 hours at 165°F and 1 hour at 145°F. Make sure the meat reaches an internal temperature of 160°F to kill any potential bacteria. The 3 hours at 165°F in the dehydrator does the trick.

Smokers are a fantastic way to make beef jerky. This is the most expensive piece of equipment you can buy to make jerky, but they are great for making so much more than just jerky.

Maintain a temperature between 180°F to 200°F and smoke the jerky for 3-5 hours. Start checking the meat after about 3 hours, the time will really depend on the type of smoker you have and how thick the meat was sliced.

I use a pellet smoker for most of my jerky making, but also make other great tasting smoked meats like baby back ribs, prime rib, and burgers.

Pellet smokers are easy to use and hold temperature within 5 degrees, eliminating you having to stoke a fire which requires a lot of time.

A traditional smoker really gives you the best smoke flavor when making beef jerky or smoked meats. They do require a little more attention than a pellet grill, but you just can't replace that great smoke flavor.

If you enjoy sitting outside drinking beer and playing with fire, than a traditional smoker like this Oklahoma Joe's Smoker is for you!

Using your kitchens oven is the least expensive way to make beef jerky. Since most kitchens already have an oven, you already have everything you need to churn out fantastic meat treats.

Place the jerky on a cooling rack atop a baking sheet and prop the door open with a wooden spoon. The gap made from the wooden spoon will allow moisture to escape the oven and allow the jerky to dry instead of bake.

Set your oven at it's lowest temperature, 170 degrees to 200 degrees and dry the jerky for 3-6 hours.

🌡️ Testing for when it's finished drying

Before testing to see if a piece of jerky is finished drying, you must remove it from your oven, dehydrator, or smoker and allow it to cool. If you don't, bending a warm piece of jerky will appear to be unfinished and result in further over drying.

Here is a piece of my Kentucky Bourbon Beef Jerky Recipe being tested. You can see the white fibers in the meat, a tell tale sign that it is finished drying and ready to eat!

To make the jerky last as long as possible, curing salt will really help along with keeping in airtight containers.

I have put together a page on storing jerky and steps you can take to make your beef jerky have an extended shelf life. Check it out!

Can I make this recipe out of ground meat?

Yes you can! Choose a ground meat that is 10% fat or less and simply omit the water. Keep everything else the same.

Do I have to use habaneros?

No, you can substitute any pepper or decide to leave the peppers out totally and have more of an original flavored jerky. Feel free to change things up!

Do I have to use curing salt? 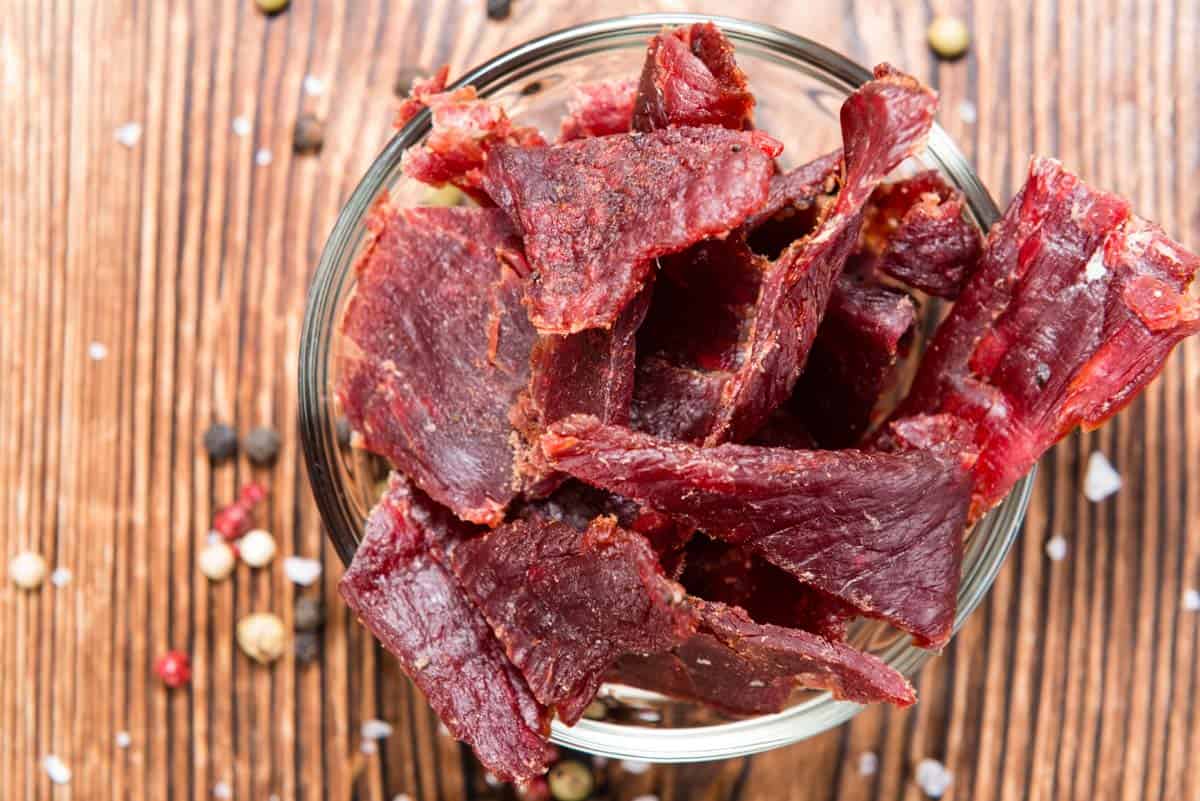 The best beef jerky recipe made with Habanero Peppers is bound for greatness! The spicy kick of the peppers and the saltiness of the Sea Salt really makes this the top jerky recipe ever! This Ultimate Beef Jerky recipe quickly jumped to the top of my list of hundreds of jerky recipes I have made over the years.
4.4 from 114 votes
Print Recipe Pin Recipe Rate Recipe
Prep Time: 1 hour
Cook Time: 4 hours
Total Time: 5 hours
Course: Beef Jerky, Snack
Cuisine: American
Type: Beef Jerky
Flavor: Spicy
Servings: 5
Calories: 184kcal
Author: Will 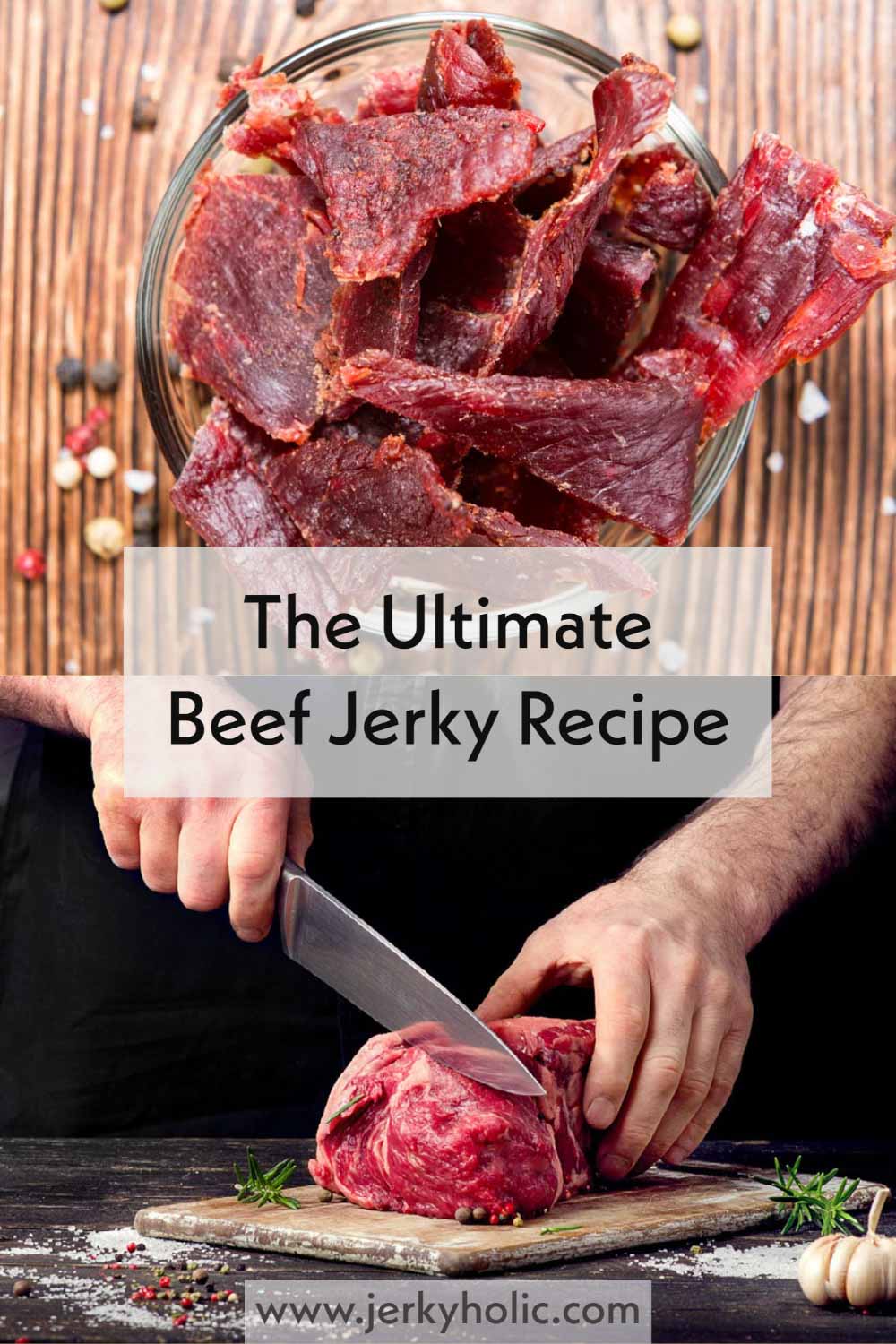