You have probably seen their commercials while watching your favorite show. The most recent one I can think of is an older lady telling a young guy "Frank's RedHot, I put that shit on everything!" Ha! You don't forget a commercial like that.

Why this jerky marinade works

Spicy jerky is hugely popular and using great tasting and well made hot sauces to obtain the spice makes it super easy to make as well. I LOVE Frank's Red Hot and it goes great with the saltier ingredients of this recipe.

If you have a favorite hot sauce, feel free to substitute it instead of Franks. The goal is to get a nice spice that is familiar to your taste buds. If you don't have a favorite, this is a great one to try!

Start with a lean cut of beef or venison, you can see a list of the best cuts of meat for jerky here. I chose a beef top round for this marinade.

Make sure to trim as much fat from the piece of meat before you start slicing. Fat spoils faster than meat, removing as much as you can now will extend the shelf life of the finished jerky.

Using a sharp knife, slice the meat in ⅛" - ¼" wide strips for jerky. Slicing with the grain of the meat will give you a chewy jerky, whereas slicing against the grain will produce a more tender beef jerky. I have put together a page on how to slice meat, it will provide you with in depth instructions.

Franks Redhot is at the heart of this recipe and really gives it a nice kick of spice. The marinade is easy to make and you probably already have most of the ingredients in the pantry.

Mix all the ingredients really well in a bowl or ziplock bag. Since there aren't any peppers in this marinade there is no need for using a blender. Mixing by hand will do just fine.

Add the previously sliced meat strips to the marinade and mix well so they are fully covered. Place in the fridge and marinate for 6-24 hours, shaking the bag several times while marinating to ensure the strips continue to be fully covered.

There is nothing better than smoked beef jerky. I enjoy using a dehydrator when making jerky as well, but nothing can beat that real smoked flavor.

Once the meat strips are finished marinating, strain any excess marinade from them with a colander and place the strips either on your smoker, dehydrator, or oven trays.

You can also hang the strips instead of laying them on the racks. A pellet smoker was used when making this jerky. Set the smoker at 180-200 and smoke for 3-5 hours.

It's important to remove a piece of jerky from the smoker, dehydrator, or oven and allow to cool 5 minutes before testing. Testing warm jerky will hint that the jerky isn't finished drying when it actually is.

The jerky is finished when it bends and cracks but does not break in half. White fibers will also be seen in the meat when it is ripped in half showing it's finished drying.

Can I make this into ground beef jerky?

Yes! Change the Soy Sauce, Worcestershire, & Frank's Red Hot to 1 tablespoon instead of ¼ cup and omit the water from the recipe. Everything else stays the same.

Do I need a dehydrator?

No, you can use your home oven or a smoker to make this jerky.

How long will beef jerky last once it's dried?

That depends on whether you used curing salt and how you package it. Visit my page on Storing Beef Jerky for everything you need to know about making your jerky last as long as possible. 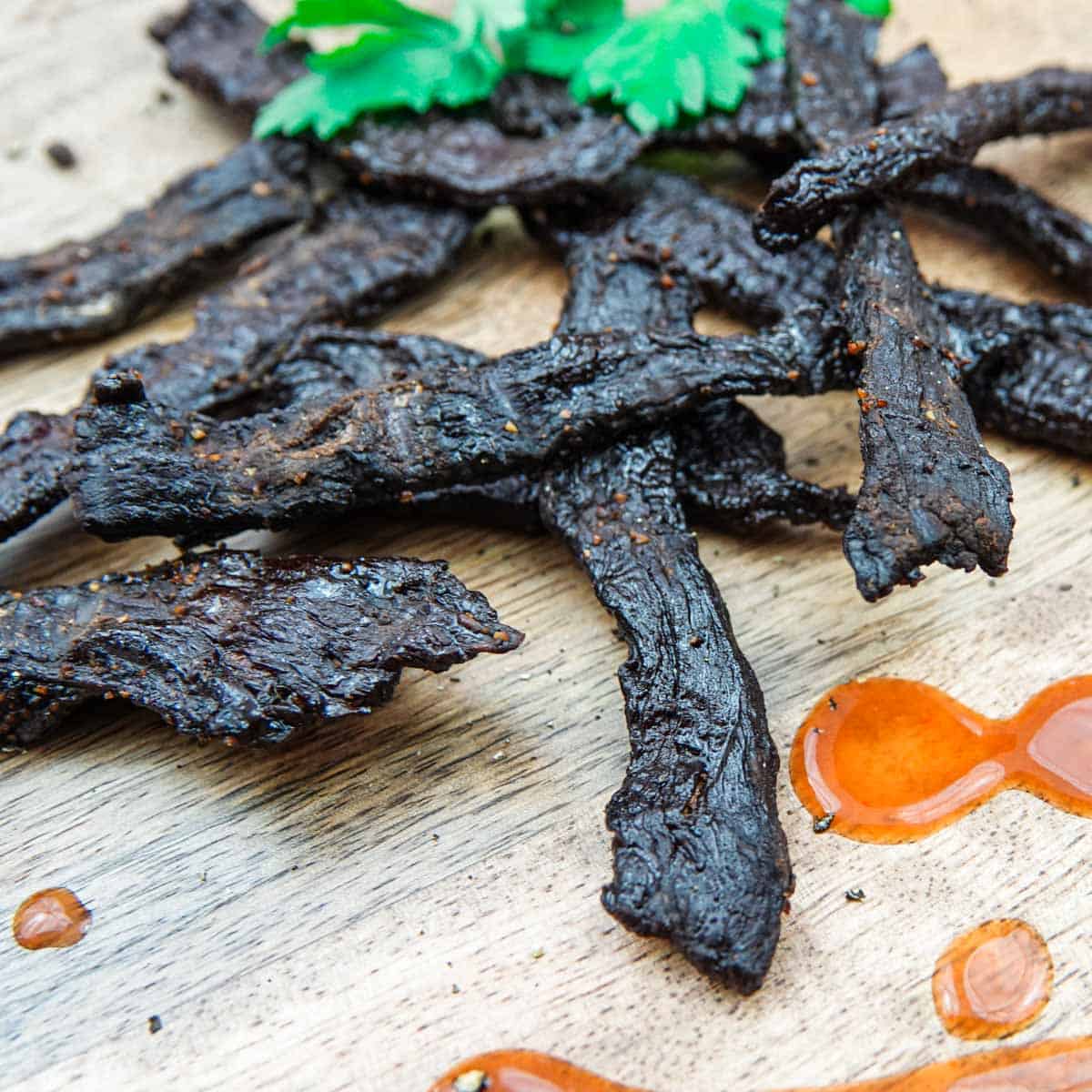 You have probably seen their commercials while watching your favorite show. The most recent one I can think of is an older lady telling a young guy "Frank's RedHot, I put that shit on everything!" Ha! Might as well put it on jerky!
4.4 from 33 votes
Print Recipe Pin Recipe Rate Recipe
Prep Time: 30 minutes
Cook Time: 5 hours
Total Time: 5 hours 30 minutes
Course: Beef Jerky
Cuisine: American
Type: Beef Jerky
Flavor: Spicy
Servings: 5
Calories: 186kcal
Author: Will 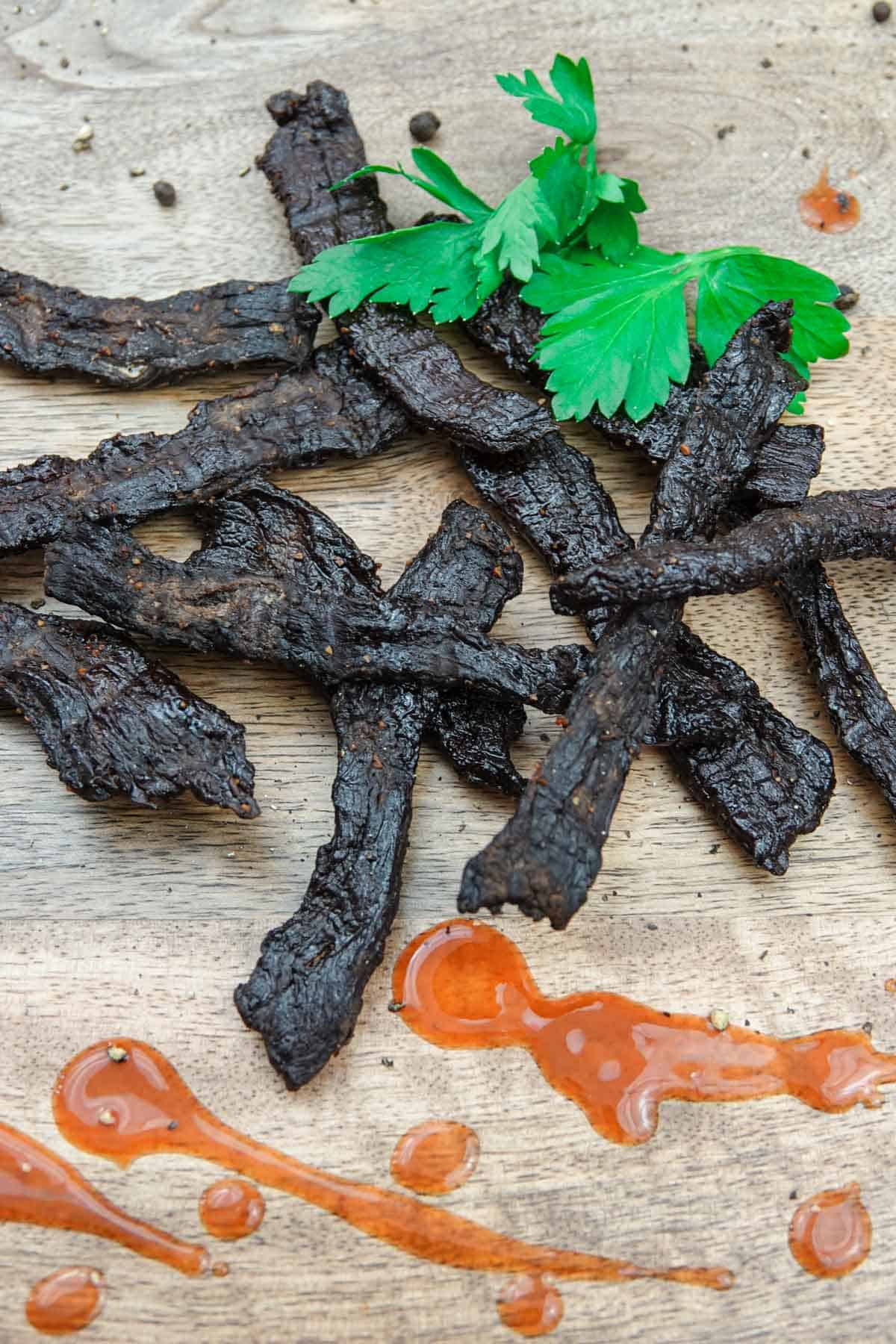