Everyone loves bacon, how can you not? So let's take it a step further and make some sweet bacon jerky that you can carry around and eat ALL day! This easy to make bacon jerky recipe can be made in a smoker or oven.

What is bacon jerky?

Bacon jerky has the same amazing flavor that you get from cooked bacon, but is less crispy and will last longer when stored. We slowly smoke or dry the bacon with a couple more ingredients to achieve greatness!

Bacon jerky is the perfect snack when hitting the trails on a long hike or just something to munch on & tide you over until dinner time. Every occasion is a good occasion for jerky!

All bacon will create great tasting jerky, but the thick cut bacon is the best. Mostly I buy Wrights thick cut bacon, pretty much the only brand I use. Either their hickory or apple wood bacon tastes great.

Will regular cut bacon work as well? Definitely, it just might turn out a little more brittle than thick cut due to it being so thinly sliced.

It can be found at pretty much any grocery store, but the best price is at Sam's Club or Costco. If you don't have a membership to Sam's, click here for basically a Free Membership for one year. I haven't been able to find any discounts to Costco.

We are marinating this bacon with a little liquid smoke and some brown sugar for a little extra sweetness. But lets be real, bacon doesn't need much added flavor to taste amazing.

So we are not going to get crazy adding a ton of flavors to this already flavorful meat. The saying "don't mess with perfection" rings true when making bacon jerky.

Add the liquid smoke, water, and brown sugar to a bowl and mix well. Pour this over ½lb of thick cut bacon strips placed in a gallon ziplock bag.

Mix it up well and let it marinade for a couple hours. No need to marinade over night, this flavor will soak into the bacon fast.

After 4-8 hours of marinating, strain the bacon in a colander to remove any excess marinade that did not soak into the bacon.

Place a cooling rack on top of a baking tray. Lay the bacon on the cooling rack / baking rack making sure to not overlap the bacon slices. Leaving space between the bacon will allow air to circulate around the meat and dry the bacon evenly.

Drying with Oven or Smoker

When making bacon jerky, using an oven or smoker will create the best results. Our goal when making jerky is to have a chewy texture, not crispy like you are used to when cooking bacon.

Making with an Oven

The easiest way to make bacon jerky is using your home oven. Everyone already has an oven, so there is no need to buy any additional equipment.

Place the marinated bacon which is on the cooling racks atop a baking sheet and place on the center rack in the oven. Set the temperature to 200°F and prop the door open with a wooden spoon to allow moisture to escape.

Bake for 4-6 hours, no need to flip the bacon half way through. Note* Your house will smell AMAZING.

Don't want to use an oven? Great, fire up that smoker!

Making with a Smoker

This bacon can be made in either a pellet smoker or a traditional stick burner (offset smoker).

Both smokers produce great smoke and will make jerky to perfection. When it comes to wood/pellets, a hickory wood or competition blend will be great for cooking almost all meats, including this bacon.

Just like the oven, place the bacon on a cookie sheet or directly on the smokers rack and allow to smoke for 4-6 hours. If using a smoker, you can omit the liquid smoke in the marinade.

During drying small amounts of grease might be seen on the surface of the bacon. Simply pat the grease off the bacon with a paper towel to help speed up the drying process.

I LOVE using my dehydrators when making beef jerky, but when it comes to bacon jerky this is NOT my go to drying method.

When drying bacon you want to hit the bacon with a little higher temperature (200 degrees fahrenheit) than you normally do when making beef jerky (160° F.)

The reason for this is to give the bacon some color. Since the marinade lacks color, the bacon jerky made on a dehydrator will turn out translucent and will NOT look appetizing.

That extra heat will give it a dark color like you get when cooking bacon. So keep the dehydrator in the pantry for this one.

While drying this homemade bacon jerky, you want to start testing to see if it has finished at about the 3-4 hour mark. Take a piece of jerky out of the oven or smoker and allow it to cool for 5 minutes to room temperature.

Bend the jerky in half; it should bend and crack but not break in half. Bacon jerky will be more moist than traditional beef jerky but also have that chewy texture. This is because of the high fat content of the bacon.

There will NOT be white fibers like there is in beef jerky, but the bacon should rip in half and NOT stretch like uncooked bacon would. It should stand up straight with a slight bend when holding a piece and have a firm feel.

Bacon jerky will not last long when storing due to the high fat content of the meat. Since it is dried at a low temperature, most of the fat and grease stays in the bacon throughout the cooking process, unlike when cooked at high temperature.

However, using ziplock bags or vacuum sealing will help prolong the life of these delicious snacks.

Where beef jerky would last 1-2 weeks, bacon jerky will last 4-7 days when stored in a ziplock bag in a cool dark place such as a cabinet.

Make sure to keep any jerky out of direct sunlight to prevent moisture from developing inside the bag. It's best to keep bacon jerky in the refrigerator for 1-2 weeks.

Want to store your jerky for a little longer? Vacuum seal the bacon jerky to expel all the oxygen from your packaging. This will help prevent bacteria growth and will let the jerky stay good for 2-4 weeks. If kept in the fridge the storage time can be extended for 1-2 months.

It's also a good idea to keep the vacuum sealed jerky in the fridge or freezer if you don't plan to eat it for some time.

There is no need to add curing salt to the bacon during the marinating process as you would with beef jerky. The bacon has already been cured and does not need any more cure.

Even if your bacon package states that the bacon is 'uncured', this is not true. It just simply means it was cured with a natural ingredient that contains nitrates such as celery juice powder instead of curing salt. Legally, they are not allowed to call it cured, even though it is.

There are a lot of flavors that go great with bacon. Making the jerky a little spicy or spicy and sweet can really take your bacon jerky to the next level.

Just coat on any spice you want to both sides of the bacon before drying for that extra kick of flavor.

What is bacon jerky?

Bacon jerky is bacon which has been marinated with flavors and dried at a lower temperature for a longer shelf life and jerky texture.

How long will bacon jerky last?

If vacuum sealed and kept in the refrigerator, bacon jerky should last 1-2 months.

What's the best method of drying this?

A smoker will give you the best results and flavor when making bacon jerky.

Can you make bacon in a food dehydrator?

I do NOT recommend using a food dehydrator because you need a temperature of 200°F to make great tasting bacon jerky. A dehydrator will leave the jerky very chewy with the feel of it being uncooked. It will also be translucent which has a very unappetizing look. 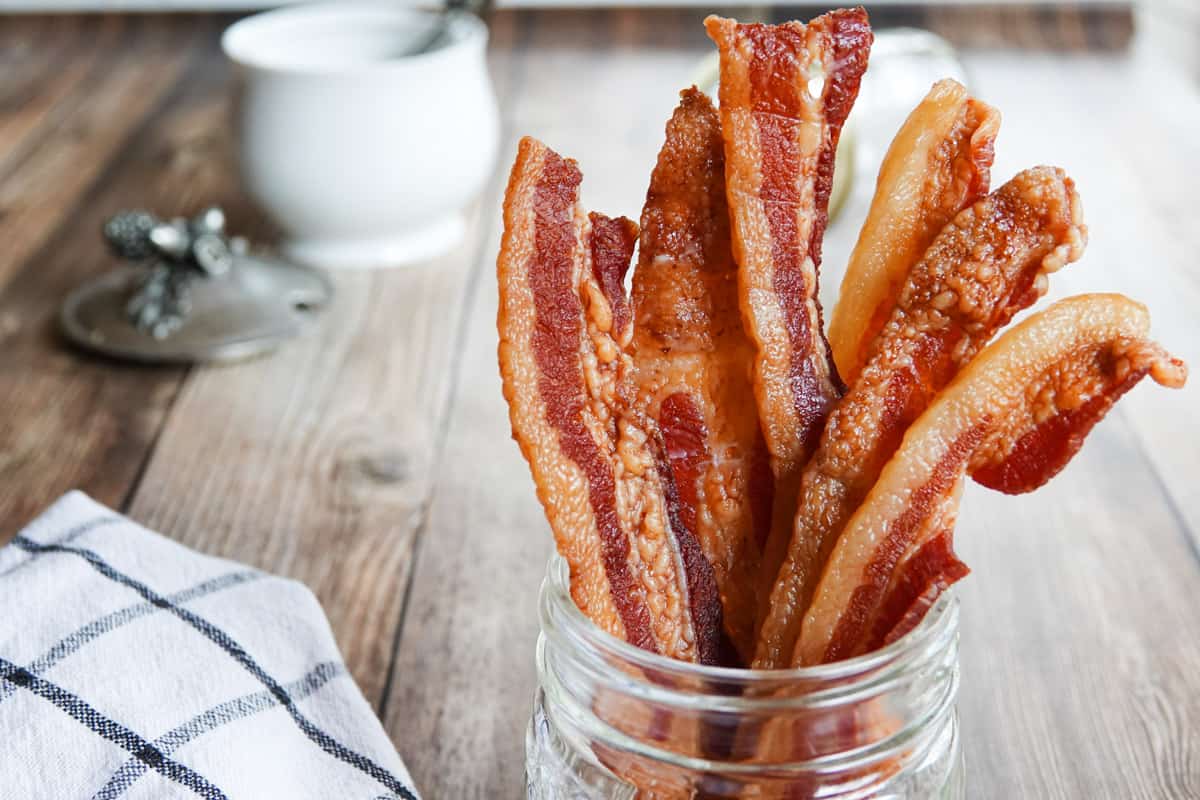 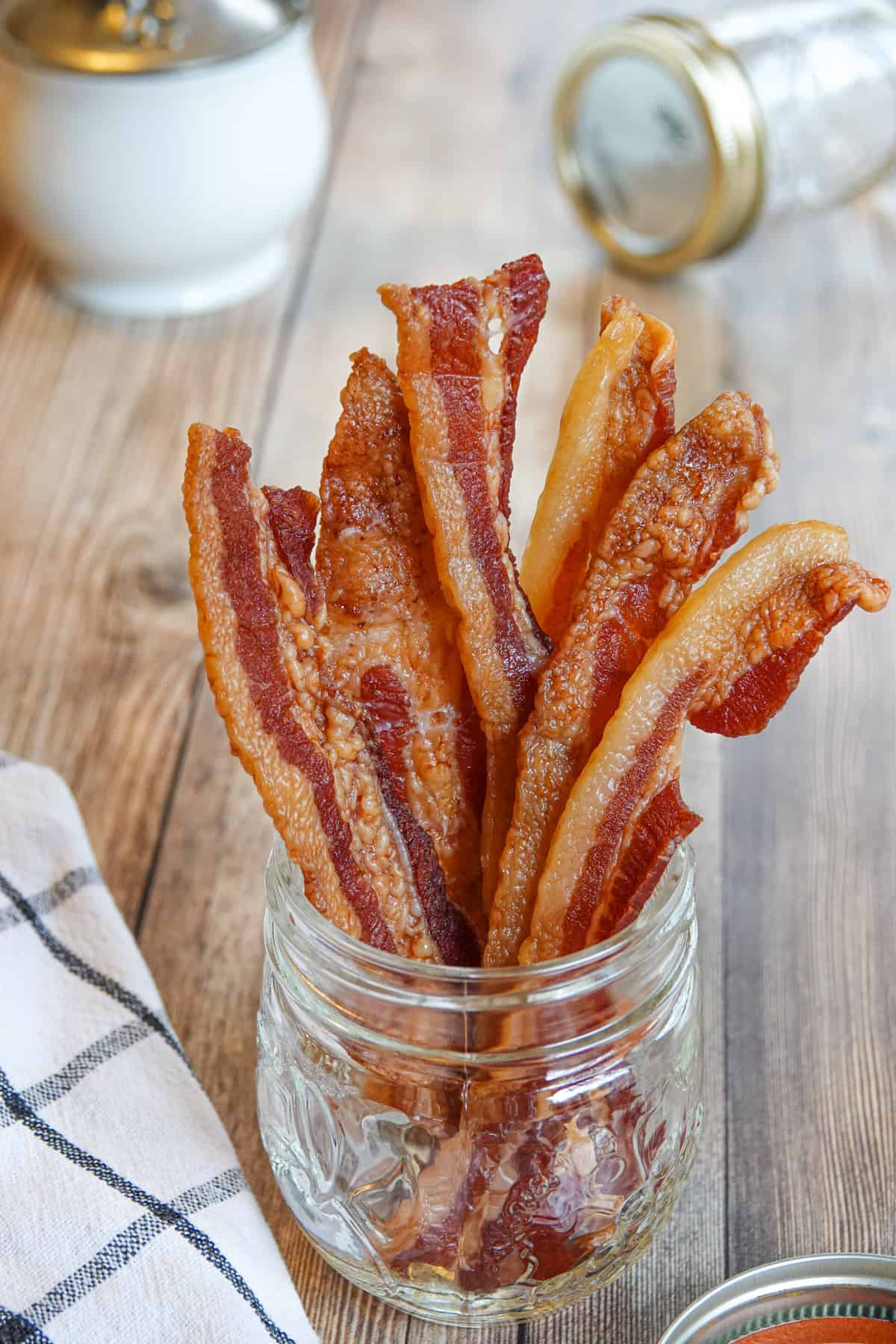