Everyone loves going to their favorite Mexican restaurant and having sizzling fajitas delivered to their table. Not only does it sound fantastic, it tastes fantastic! After going out to eat and having fajitas last week, I decided it was about time I try making a fajita jerky.

I have never made fajita flavored jerky and wasn't sure how it would turn out. It has to be good, right? After all, fajitas are super amazing! I began looking for a good fajita recipe online that I could use for my fajita jerky. I stumbled upon Grilled Skirt Steak Fajitas on the website Seriouseats and it looked perfect.

I cut the ingredients in half to suit my need of a marinade for only one pound of beef. I also switched out the skirt steak for an eye of round, my favorite cut of beef for making jerky.

I started making this jerky like I do every batch, putting the beef in the freezer while I mix the marinade. Add all of the ingredients (listed below) in a bowl. I did go a little light on the lime juice as a personal preference. I enjoy lime in my jerky, but just a hint. I feel like too much lime can really take over the flavor and quickly become too overpowering.

I could tell from the start this was probably going to be a great jerky recipe simply by the smell of the marinade. I couldn't keep from thinking that fajita jerky might be my best jerky yet! Okay, Let's not get ahead of ourselves.

After slicing the partially frozen eye of round, I marinated the meat for 10 hours per the recipe. I usually marinate jerky longer, but have been noticing that with such thin meat that 8-10 hours does the job. You will also see that I heat treated the fajita jerky before drying instead of after. This is the process of bringing the jerky to an internal temperature of 160° F to kill any possible bacteria.

I just love my Polder thermometer. This thing is great for telling you when your meat hits the right temp so you can remove it from the oven as soon as it is finished. Heat treated for 10 minutes at 325° and then dried with my Nesco dehydrator for 4 ½ hours at 130° .

How did it taste? Pretty damn good! If you are looking for a fiesta style jerky I would highly recommend fajita jerky. Even though it does have the typical soy sauce, it strays away from the "usual" jerky taste. The lime gives this fajita jerky a great little splurge of flavor that goes great with the sweetness of the brown sugar. I hope you enjoy! 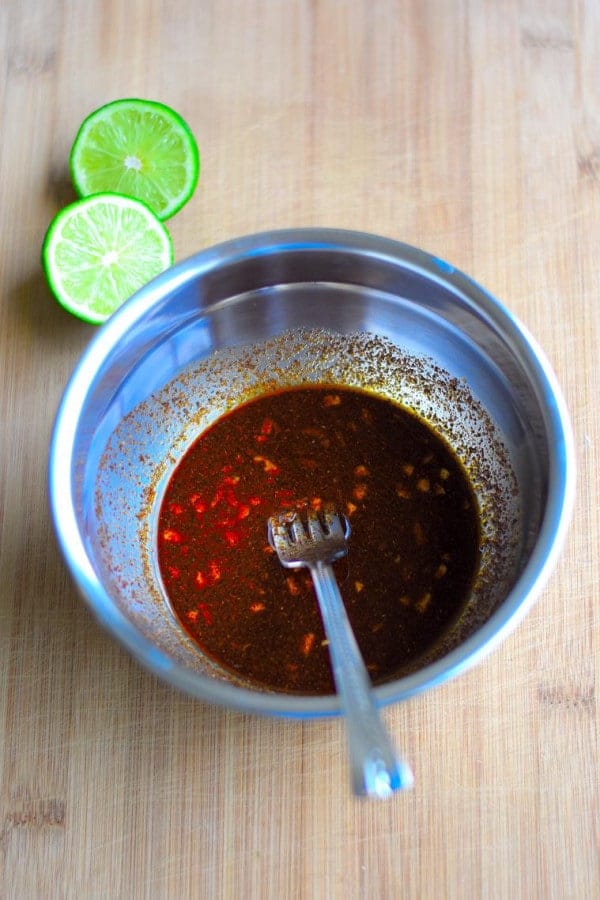 Everyone loves going to their favorite Mexican restaurant and having sizzling fajitas delivered to their table. Not only does it sound fantastic, it tastes fantastic! After going out to eat and having fajitas last week, I decided it was about time I try making a fajita jerky.
3.7 from 10 votes
Print Recipe Pin Recipe Rate Recipe
Prep Time: 1 hour
Cook Time: 6 hours
Total Time: 7 hours
Course: Snack
Cuisine: Beef Jerky
Type: Beef Jerky
Flavor: Savory, Sweet
Servings: 5
Calories: 224kcal
Author: Will