When naming a beef jerky recipe after Firemen, you have to make it hot enough to set your mouth on FIRE! This jerky recipe does just that, so get a glass of milk to keep your mouth cool and let's get to making some Spicy Hot Jerky!

The second step of slicing meat for jerky is to trim the cut of meat of all visible fat.

That white fat is called the fat cap. Just trim that off BEFORE you start slicing the meat. Fat spoils faster than meat, so the more you get off now, the longer your jerky will be shelf stable.

Slice the meat in ¼" thick pieces. If you wrap the roast in plastic and put in the freezer for an hour or two, slicing even strips is easier. If you don't want to freeze the meat to firm it up a bit, make sure to have a REALLY sharp knife.

If you need more information on slicing meat for jerky, check out my slicing jerky page, it explains EVERYTHING.

I didn’t use it on this recipe, but a jerky slicer is a FANTASTIC piece of equipment to help get even strips when slicing jerky.

Thirdly, put together a well balanced and great tasting marinade. Fireman's Beef Jerky is made with two types of hot peppers and liquid smoke to finish off the FIRE flavor!

I first made this marinade with only poblano peppers, but the heat wasn't enough. That's why I added several habaneros to really make this jerky HOT.

Start by mixing all the ingredients, minus the peppers in a bowl or blender. Since I am using whole peppers in this recipe, using a blender is the best way to fully incorporate them into the marinade.

The poblano and habanero peppers can be added whole or sliced (do not remove seeds, only stem) to the other marinade ingredients inside a Vitamix blender. Blending the peppers REALLY makes the jerky so much more flavorful and spicy!

After tasting the marinade with only the Poblano pepper it was realized that it needed to be kicked up a notch. Adding some habaneros remedied this giving it some real spice.

Place the previously sliced beef in a ziplock bag and pour the blended marinade over the strips. Marinate in the refrigerator for 6-24 hours mixing the bag up several times to further make sure the strips are evenly coated. This makes sure the every piece of finished jerky has a consistent flavor.

If you are in a rush, these vacuum marinating machines do work pretty well. About ½ an hour and your jerky will turn out like it marinated for 12 hours. Not bad!

Once the meat has finished marinating, strain any excess marinade in a colander and pat the strips dry on paper towels. This beef was marinated for a total of 20 hours before straining. The longer the marinade process, the more intense flavor the jerky will have!

Patting the meat with paper towels removes any excess marinade which speeds up the drying process and also prevents a "sticky" feel when the jerky is finished dehydrating.

A Nesco Gardenmaster Dehydrator was used when making this beef jerky recipe. I LOVE the Nesco dehydrators. They work great, are reasonably priced, and they last a long time!

Leave space between the jerky so air can flow freely drying each jerky strip evenly.

Testing For When The Jerky Is Finished

While drying the jerky, you want to start testing to see if it has finished at about the 3-4 hour mark. Take a piece of jerky out of the dehydrator, oven, or smoker and allow it to cool for 5 minutes to room temperature. The jerky will harden slightly once it has cooled down, so not allowing a piece to cool before testing can result in over drying the jerky.

Bend the jerky in half; it should bend and crack but not break in half. You will also see white fibers in the meat. The fibers are really visible when a piece is ripped or bent in half.

This jerky took 5 hours to be finished. 90% of the jerky I make is finished within 4-6 hours when using a dehydrator or oven and 6-9 hours when using a smoker. If pre-heating the meat in the oven, drying time can be as little as 2.5 hours.

To make the jerky last as long as possible, curing salt will really help along with keeping in air tight containers. I have put together a page on storing beef jerky and steps you can take to make your jerky have an extended shelf life.

This Fireman's Beef Jerky recipe has a spicy kick but a great strong beef flavor brought out by great ingredients and fresh peppers. The liquid smoke adds to the Fireman's hot, spicy, smokey flavor I was going for with this recipe. If smoking your jerky, you can omit the liquid smoke.

For more in depth directions on how to dry your beef jerky, visit my page Jerky Making Methods. 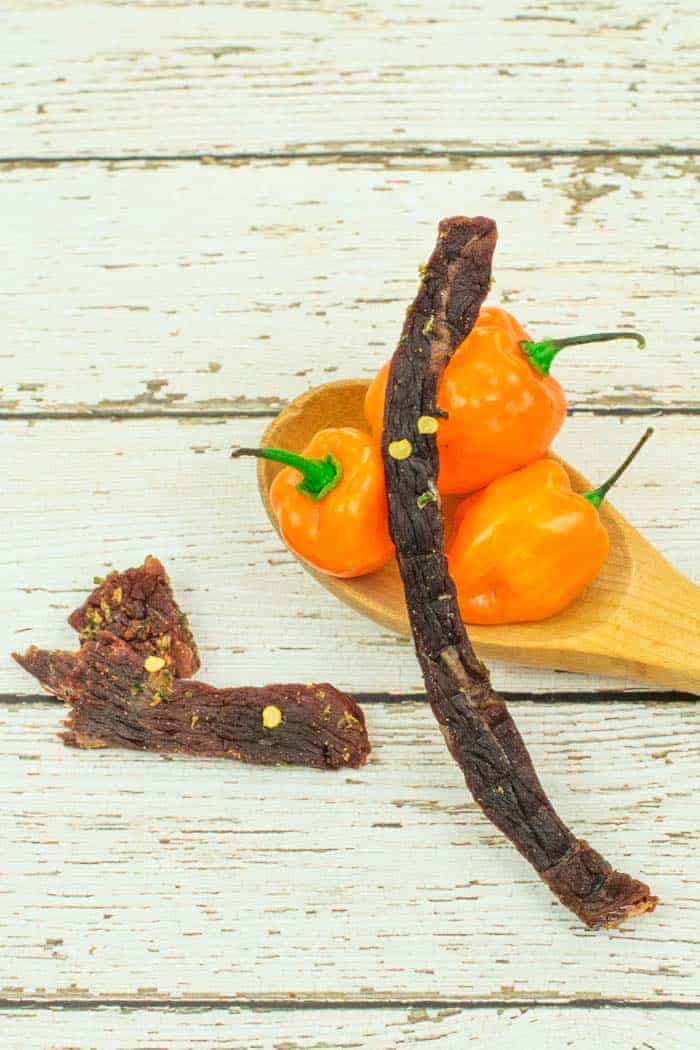 When naming a jerky after Firemen, you have to make it hot enough to set your mouth on FIRE! This beef jerky recipe does just that, so get a glass of milk to keep your mouth cool and let's get to making some Spicy Jerky!
5 from 1 vote
Print Recipe Pin Recipe Rate Recipe
Prep Time: 1 hour
Cook Time: 5 hours
Total Time: 6 hours
Course: Snack
Cuisine: American, Beef Jerky
Type: Beef Jerky
Flavor: Spicy
Servings: 5
Calories: 17kcal
Author: Will