I had a buddy hook me up with an Elk Roast from this past hunting season. So what did I decide to do with it? Make some Elk jerky!!! This is the first time I have made jerky out of Elk and was very happy with the flavor and texture of the meat. Check out one of the recipes I made below.

The roast was very lean with only a little bit of fat to be trimmed. I trimmed the fat and cut into several chunks in preparation for slicing. 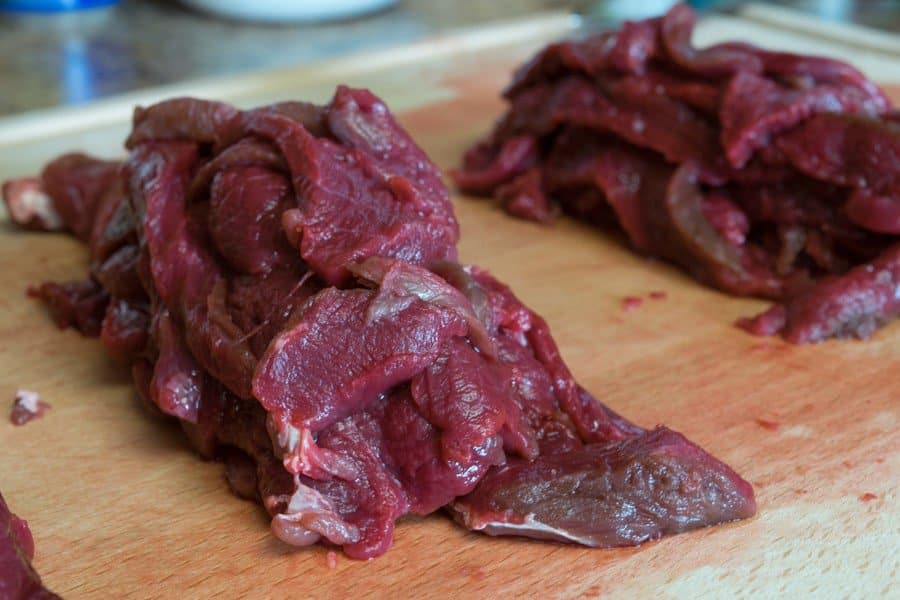 I used my Weston Jerky Slicer to slice this elk roast into even and consistent strips. I love using this jerky slicer and haven't sliced meat by hand since I purchased it.

The only problem I had when slicing this roast is that the meat was not as firm as most beef roasts I use which made the slicer have a hard time pulling the roast through the blades. The next time I slice elk I will make sure to place the meat in the freezer for about an hour to just firm up the meat. 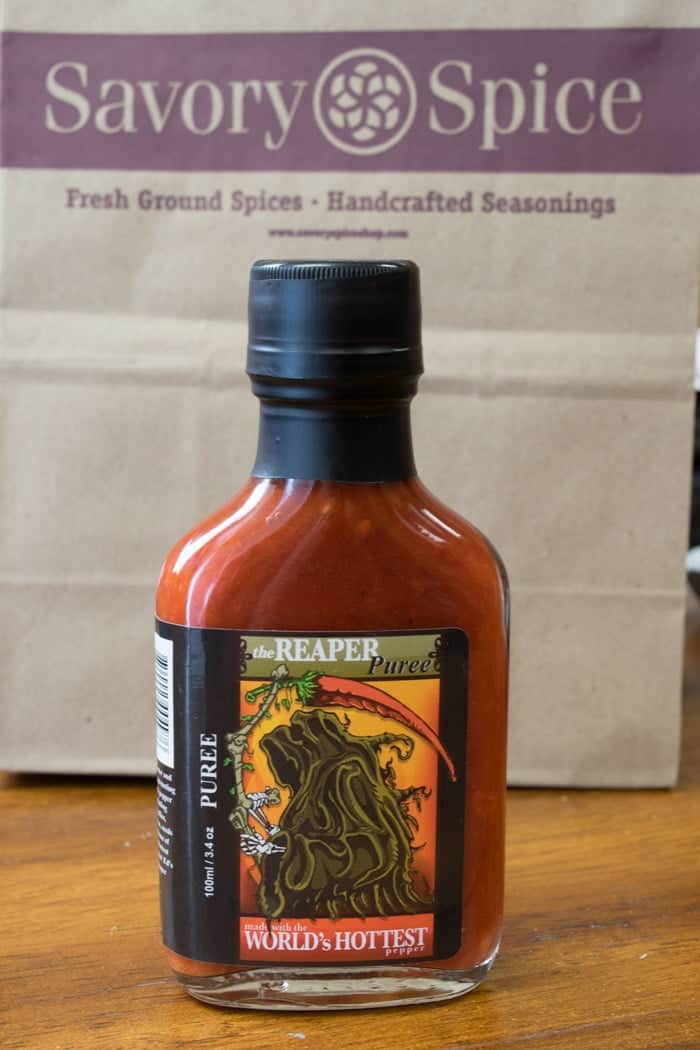 So why is this called Grim Reaper Elk Jerky? It's because I finally got my hands on some Carolina Reaper peppers, the hottest pepper in the world! ***Spoiler Alert - This jerky was HOT!***

Okay..... So I did not get the whole or dried peppers, but I did get this Reaper Puree which is made up of the peppers and some vinegar. I got it from my local Savory Spice Shop. You can order this puree online at their website if you don't have a store near you. It is about $20, but will last a LONG time! 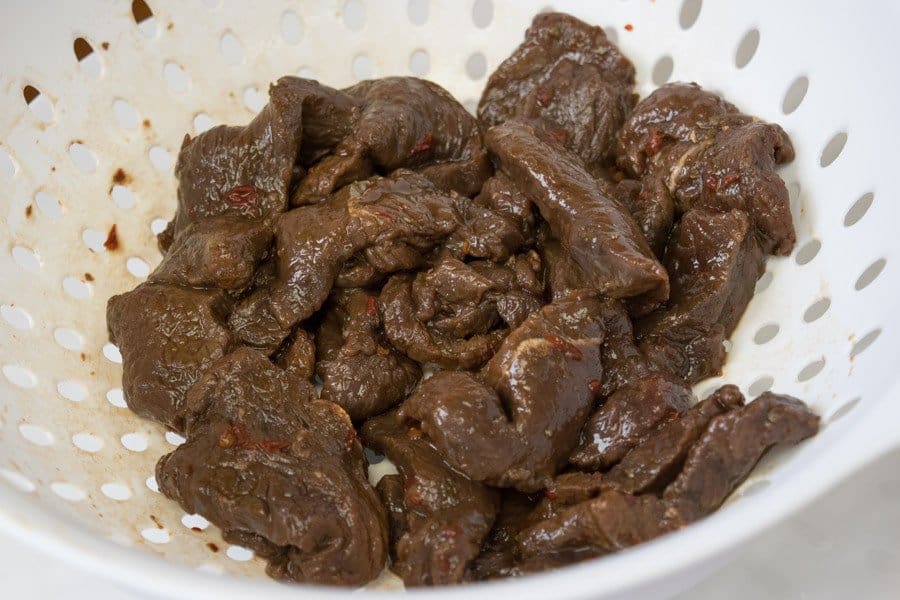 After marinating for 20 hours I strained the jerky strips in a colander before dehydrating. I did not need to use gloves when removing the strips from the colander and placing on the dehydrator. I was worried it might burn or leave residue on my fingers, but this did not happen.

I used my Nesco Dehydrator when making this Elk Jerky. It took about 4 hours at 160°F to get it just right. This is one of my favorite dehydrators to use when making jerky. The smell of this jerky made my house smell fantastic! I couldn't wait for it to finish... 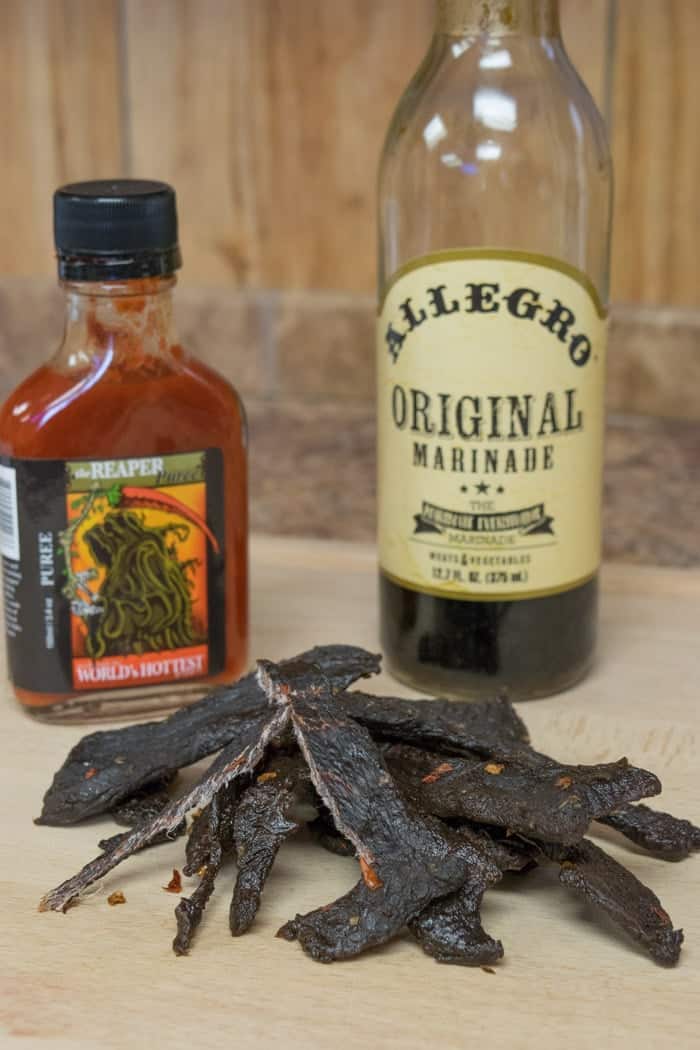 This recipe is super easy to put together! It only has two ingredients, but it produces an AMAZING tasting jerky!

At first I was amazed it wasn't that spicy, but then the heat crept up on me and revealed it's full flavor! The saltiness from soy sauce based Allegro Original Marinade compliments the peppers and makes this a very tasty jerky.

If you follow the recipe below, you will have some VERY spicy jerky. When I and friends ate this jerky, we all started sweating. I could only eat one piece and had to wait about another 30 minutes before eating another.

If you do NOT want this spicy of jerky, cut the amount of Reaper Puree by half. This will still produce a spicy jerky, but won't have you raiding your fridge for some milk! 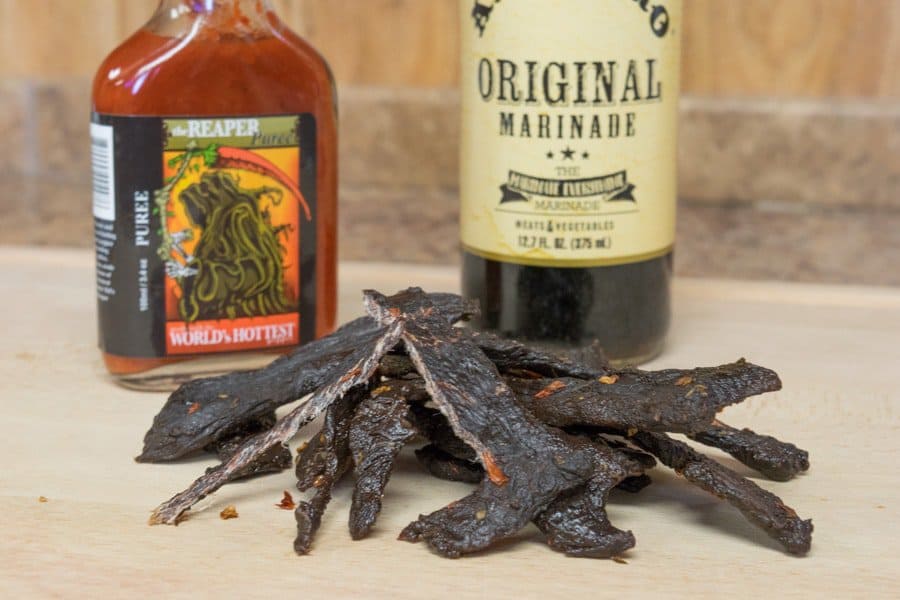 For more in depth directions on how to dry your jerky, visit my page Jerky Making Methods or click on the pictures below.

At first I was amazed it wasn't that spicy, but then the heat crept up on me and revealed it's full flavor! The saltiness from soy sauce based Allegro Original Marinade compliments the peppers and makes this a very tasty jerky.
4.5 from 4 votes
Print Recipe Pin Recipe Rate Recipe
Prep Time: 30 minutes
Cook Time: 4 hours
Total Time: 4 hours 30 minutes
Course: Snack
Cuisine: jerky
Type: Game Jerky
Flavor: Spicy
Servings: 5
Calories: 159kcal
Author: Will