The best thing you can do with that venison you harvested this season is to make it into jerky! This spicy (or not) deer jerky recipe has a fantastic original flavor that will be eaten QUICK!

Why this marinade works

I love an original tasting jerky, one that most people have come to know and love. Without the peppers added in this recipe, this deer jerky has that original jerky flavor. With the peppers, it's HOT! I preferred the spicy version that had a ghost pepper added. The jerky didn't turn out as spicy as the marinade tasted (it never does), so I would add 2 peppers next time for some real heat!

Just like many of you, I have a BUNCH of deer meat from this last hunting season in the freezer. I plan on using it ALL to make deer jerky this upcoming year. Is there any other way to eat venison?

I thawed my freezer packed venison roasts in a bowl of water in the refrigerator prior to slicing. Make sure to defrost any meat in the refrigerator and NOT on your kitchen counter. Submerging the meat in water will speed up the thawing process immensely.

After thawing and rinsing the deer roast, trim as much fat and silver skin as you can from the meat. Fat spoils faster than meat and will shorten the shelf life of the finished jerky.

Since I was going to use my Weston Jerky Slicer to cut the roast into jerky strips, I had to first slice the roast into 1″ thick pieces so they would fit into the slicer. Using a sharp knife really helps slice through meat that is not partially frozen.

If you do not have a really sharp knife, you can put the meat back in the freezer for 1-2 hours to partially freeze/harden the meat so slicing evenly sized strips is easier. Visit my how to slice jerky page for more information on slicing meat for the perfect jerky.

To slice the perfect strips, I fed my venison steaks through the jerky slicer and it cut it perfectly like always. I LOVE this thing! You do not NEED this slicer, you can slice the meat by hand into strips. However, if you start making a lot of jerky, this thing is a must!

You can see above I separated the meat into three 1lb piles. I made three different deer jerky recipes out of this roast. Find a link to the other two below!

Let's make this marinade! This deer jerky recipe has a great marinade base with soy sauce and worcestershire sauce. You can make this recipe with peppers or not. I made it both ways and they came out great either way. I prefer a little spicy jerky, so throwing in a ghost pepper was a must!

If you decide to add peppers, it is best to use a blender to chop them up very small and fully incorporate them into the recipe. This allows the meat to be evenly covered with the pepper giving it an even amount of spice over all the jerky slices. I used 1 dried ghost pepper when making this recipe, but 2 peppers would have been perfect.

Add the marinade to a ziplock bag or bowl and add in the jerky slices. I like using a ziplock bag because I feel like the slices are more evenly covered. Marinate for 12-24 hours in the refrigerator, the longer the better! Every 4 hours or so mix up the jerky in the bag so every part of the slices are covered with marinade.

Once you have finished marinating, strain any excess marinade in a colander. The jerky should soak up about half of the marinade.

Lay out several paper towels and place the jerky strips on the paper towels. Place more paper towels on top of the strips and pat them dry. This helps speed up the drying process in the dehydrator, oven, or smoker.

I used my Excalibur Dehydrator when making this recipe. Above you can see the strips laid out on the dehydrator trays with space between them so air can flow around each piece and dry each strip evenly.

The soy sauce and worcestershire were mild and the deer jerky even had a little bit of a sweet flavor. This is a must make recipe, just be careful if you decide to share any.... You might have to make more to keep everyone satisfied!

How do you store jerky?

In an airtight bag or jar in a cool place out of sunlight. Here I have everything you need to know about storing homemade jerky.

Can this recipe be made with beef?

Yes. You can use beef or pork with this marinade.

What's the best cut of deer to use?

The roasts from the hind quarters is the best. I explain in more detail here on our best meat for jerky page. 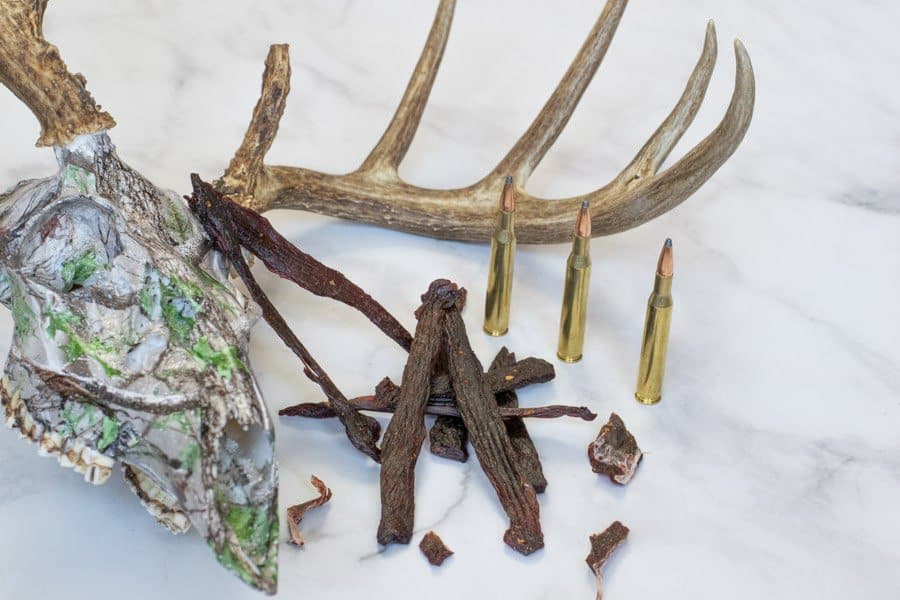 The best thing you can do with that venison you harvested this season is to make it into jerky! This spicy (or not) recipe has a fantastic original jerky flavor that won't last long if you share it with friends!
5 from 34 votes
Print Recipe Pin Recipe Rate Recipe
Prep Time: 40 minutes
Cook Time: 4 hours 30 minutes
Total Time: 5 hours 10 minutes
Course: Jerky
Cuisine: American
Type: Game Jerky
Flavor: Spicy, Sweet
Servings: 5
Calories: 166kcal
Author: Will 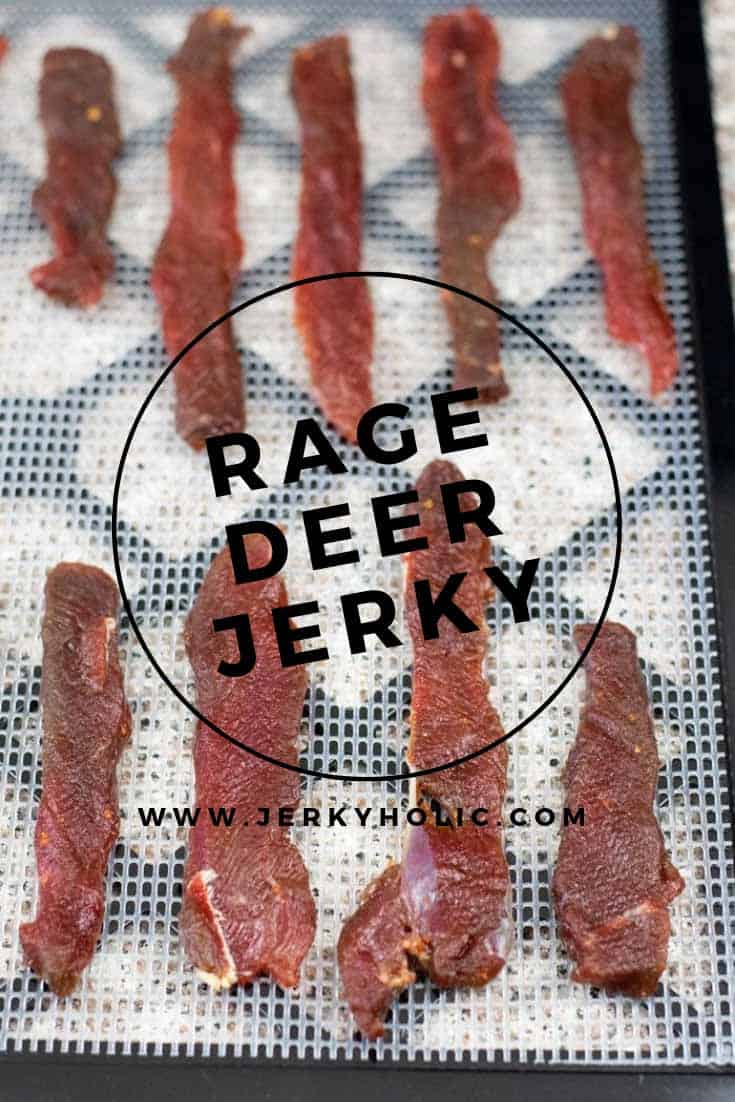